The Children’s Rights Alliance is governed by a voluntary board of directors mostly elected from the membership. Our current Board members are:

Tom Maher is currently employed as the Director of Services at St. Patrick's Mental Health Services. This service comprises a mental health service that includes 3 Approved Centres, a network of community mental health clinics and a Wellness and Recovery Centre that includes extensive day services. The role includes responsibility for the development of and efficient delivery of all clinical services, funding, clinical governance and quality. These services are delivered by approximately 360 clinicians including social work, nursing, medicine, clinical psychology, occupational therapy, psychotherapeutic staff and the associated administrative staff necessary for such delivery. The services in SPMHS are provided by multi-disciplinary teams and a range of care programmes (including Anxiety Programme, Eating Disorder Programme, Depression Recovery Programme, Bipolar Affective Disorder Programme, Young Adult Programme, Addictions Programme, Dual Diagnosis Programme, Mental Health Care of Later Life, Psychosis Recovery Programme, Living through Distress and Radical Openness Programmes, Wellness and Recovery Action Planning(WRAP) Programme). Prior to this post he worked for 24 years as a nurse in a variety of clinical, administrative and educative roles.

Colm Bryson is Treasurer of the Children’s Rights Alliance. Colm joined the Finance, Audit and Risk Committee of the Alliance as an independent committee member in November 2015 and was then co-opted on to the Board and to the position of Treasurer in February 2018. Colm is a fellow of the Association of Chartered Certified Accountants (FCCA) and holds a Bachelor of Business & Legal Studies degree from UCD. He has been the Head of Finance at IPB Insurance since May 2012. He is involved with coaching of underage GAA and rugby teams and is also the Treasurer of the Belvedere College Past Pupils Union.

Moninne leads BeLonG To Youth Services, Ireland’s national organisation for LGBT+ young people. As CEO, she is dedicated to supporting and empowering LGBTI+ young people. Moninne previously spent 8 years as Director of Marriage Equality, a single-issue organisation working for, and historically achieving, equality for same-sex couples in Ireland, and equality for many children in non-traditional families. Moninne was Chair of the Government’s Gender Recognition Act Review Group and a member of their LGBTI+ Youth Strategy oversight committee. Moninne was a member of the Government’s Taskforce on Youth Mental Health and is a former Chairperson of the National Women’s Council of Ireland. She is passionate about Youth Mental Health and is a member of the Government’s National Implementation Monitoring Committee for ‘Sharing the Vision – a Mental Health Policy for Everyone’, the DCEDIY’s BOBF Advisory Council. Moninne worked as a solicitor in general practice for a decade and holds a Bachelor of Civil Law and a MA in Women’s Studies from University College Dublin.

June Tinsley has been advocating and leading policy and legislative change for vulnerable groups for nearly twenty years. She has extensive
experience in children’s related issues during her time in Barnardos where she championed reform in areas of child poverty, child homelessness,
education and child protection. Since leaving Barnardos in 2019, she joined NCBI (National Council for the Blind of Ireland) as Head of Advocacy and
Communications where she now raises public and political awareness of the needs of people (including children) who are blind or vision impaired.

Orla is a member of the Group Risk executive team at Bank of Ireland and has held numerous positions and managed multiple projects during her career with the bank which include Outsourcing, IT change, Procurement, Facilities Management, Real Estate restructure and Chief Operations Officer Markets and Treasury. Orla holds a Bachelor of Business Studies degree from Trinity College and a CIPD diploma in Human Resource Management from the National College of Ireland. 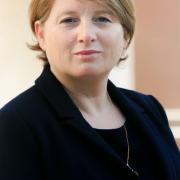 Ciairín is CEO of Women for Election, a not-for-profit, non-partisan organisation whose mission is to inspire, support and equip women to succeed in politics. Prior to joining Women for Election, Ciairín worked campaigning in early years, most notably as CEO of Start Strong. She is a board member of Sonas and was previously a member of the Parole Board.

Michelle is the Manager of Finglas Youth Service, a project of Crosscare and has over 15 years' experience in the non-profit sector. Michelle also worked in the Combat Poverty Agency on policy issues and research relating to poverty and social inclusion. She holds a Masters in Social Policy, a Certificate in Leadership & Management in Community Based Projects, and recently completed an MBA in Trinity College. Michelle has a keen interest in children’s rights and particularly in the area of youth justice, poverty and young people’s participation.

Catherine Joyce is a prominent Traveller and human rights activist. Catherine has advocated for Travellers’ rights for over 35 years and is a former director of the Irish Traveller Movement. She has contributed to national and international forums on progressing Travellers’ human, social and cultural rights. She is currently Manager of the Blanchardstown Traveller Development Group. Catherine was a recipient of a People of the Year Award in 1991. Catherine Joyce was prominent in Irish Travellers being formally recognised by then Taoiseach Enda Kenny formal recognition for Travellers as a distinct ethnic group in 2017.

Dr. Nita Mishra is a researcher on social inclusion, tutor and part-time lecturer in University College Cork. She is also an occasional lecturer across various universities (Ireland, India, Vietnam) on rights-based approaches to development, food security, gender, NGOs and research methodologies. Nita is Indian originally, but an Irish citizen since 2014. She has written numerous research papers in peer-reviewed journals. Her poetry is critically acclaimed as the future of Irish feminism. She serves as a steering committee member of the Development Studies Association Ireland amongst other bodies and is a director on the board of NPCPP currently.

Karen Hannify (Nominating Organisation - Foróige)
Karen is Director of Marketing, Communications and External Relations with Foróige. She joined the organisation in 2002, having previously worked in Public Relations Consultancy. As a member of Foróige’s Senior Management Team, Karen is responsible for Internal and External Communications; Public Affairs; Brand Development; Reputation Management; Digital Media Management; Corporate Engagement and Relationship Management. Karen has served a number of terms on the Boards of both Léargas and the National Youth Council of Ireland (NYCI), including a term as Vice-President of NYCI. She works closely with the Department of Children and Youth Affairs, particularly the Youth Participation Unit, managing a number of their flagship events including Dáil na nÓg and the Comhairle na nÓg National Showcase. Karen holds a Masters Degree in Public Relations.