In August 2009, The Body Shop Ireland and ECPAT global began a three-year global campaign entitled: Stop Sex Trafficking of Children and Young People. The three aims of the campaign are to raise awareness of the 1.2 million children trafficked globally on an annual basis, influence governments worldwide to implement stricter anti-trafficking policies and legislation, and empower ordinary people to make a difference.  The campaign began with the Alliance helping to launch the The Body Shop’s Soft Hands, Kind Heart  hand cream.  The hand cream went on sale in 12 stores throughout Ireland for €5.95 (£3.45 donated directly to campaigns and prevention projects against child trafficking in Ireland).  This has proved a great success, with over €30,000 raised to date.

On 8 July 2010, a global petition and Country Progress Card was launched on Dublin’s Grafton Street branch of The Body Shop.  The campaign calls on every concerned person in Ireland to show their solidarity, by tracing their hand as part of a petition in their local The Body Shop store.  Celebrity supporters across the world include: Twilight’s Robert Pattinson, Sienna Miller, Sir Ben Kingsley, Yoko Ono, Joanna Lumley, Mark Ronson, Joely Richardson, Denise van Outen, and Pixie Lott. 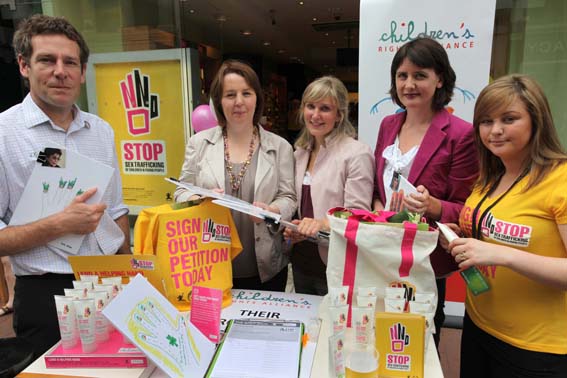 The petition looks for the support of people in Ireland calling for Government to:

The Progress Card, developed by ECPAT International and the Alliance, identifies Ireland’s progress in combating the sex trafficking of children and young people. An executive summary was also produced. Ireland was among the 53% of countries deemed to be showing ‘some progress’ in putting an end to the third largest, and fastest growing, criminal industry in the world, but Ireland continues to be a destination for child trafficking as well as a transit point for children trafficked to the UK.

Child trafficking concerns have been regularly raised by the Ombudsman for Children, the Special Rapporteur on Child Protection and a range of NGOs. Since 2000, over 500 children in the care of the state have gone missing. A shocking 90% remain missing, and it is feared that many may have been trafficked. Ireland has a detailed National Action Plan to tackle human trafficking but the Plan’s recommendations in relation to child trafficking need to become practice now, if victims are to be adequately protected.

Please show your support for the campaign, like Sienna Miller (left), by going into your local The Body Shop store to sign the petition, or go online here.